The strategic initiative will be implemented by Australian Lithium Alliance Pty Limited (ALA), a wholly owned subsidiary of EVM, through joint ventures and off-take agreements as an alternative to Chinese companies that currently dominate the purchase of spodumene concentrate from Australia to supply chemicals processing companies in China.

Eng. Abdullah S. Busfar, Chairman of EVM comments, “The Australian Lithium Alliance is a strategic global initiative to secure the upstream integration of supply chains for critical raw materials required to fast track the development of the BCC in the Kingdom.”

“The BCC is being developed as a midstream and downstream global hub for production of high purity chemicals and cathode active materials for domestic and export sales to original equipment manufacturers and battery cell manufacturers in growth markets in Europe and North America seeking stable, long term, independent and transparent supply chains as structural deficits emerge in lithium after 2025.”

EVM launched the formation of the Australian Lithium Alliance with the release of details of an agreement in the form of an Earn-in Joint Venture and Lithium Rights Deed (Agreement) between EVM, ALA, Zenith Minerals Ltd (ZNC) and Black Dragon Energy (Aus) Pty Limited (BDE), a wholly subsidiary of ZNC.

The terms of the Agreement are outlined in the Announcement by ZNC (ASX Code: ZNC) to the Australian Securities Exchange (ASX) dated 13 January 2022, a copy of which can be found here.

The Agreement will accelerate the exploration for and, if successful, the development, mining, processing and production of Lithium Minerals from the strategically located Split Rocks and Waratah Well Tenements under the Zenith Lithium Joint Venture. EVM will also enter into a life of mine offtake agreement for all production of SC6 from all Lithium Minerals Projects developed by the Zenith Lithium Joint Venture.

Under the Agreement Lithium Minerals include ‘lithium (in any and all forms) and all other metals including tantalum, caesium, all rare earth elements, nickel, cobalt, copper and scandium in the Tenements but specifically excludes gold, silver and other precious minerals however they may occur’.

Michael Naylor, Managing Director of EVM comments, “The aim is for the Australian Lithium Alliance to build the Zenith Lithium Joint Venture into the largest producer of Lithium Minerals in the form of spodumene in Australia.”

“EVM will fund ZNC’s share of all capital expenditure for the development and commissioning of a Lithium Minerals Project which will be repaid by ZNC from its share of Lithium Minerals products on the same terms as project finance secured by EVM.”

“ZNC is a standout strategic fit and a first mover for the Australian Lithium Alliance. ZNC is led by Director, Stan Macdonald and CEO, Mick Clifford, who have a strong track record of success in project generation, acquisition and exploration for minerals in Australia. ZNC has been listed on ASX for about 15 years. It is debt free with a valuable project portfolio of advanced exploration projects for lithium, gold and base metals in Australia.”

“EVM will work with ZNC through the Australian Lithium Alliance to develop ZNC as a pure Lithium Minerals company and leading producer of SC6, the preferred feedstock for the production of lithium monohydrate by the Lithium Chemicals Plant in the Battery Chemicals Complex.”
“ZNC and the Zenith Lithium Joint Venture is strategically positioned to access the first two trains of LHM in the Lithium Chemicals Plant which are scheduled for commissioning in the second half of 2024.”

“We are moving to fast track the evaluation and development of a Lithium Minerals Project through the Zenith Joint Venture to meet the schedule for SC6 feed for the first two trains of LHM.”

EV Metals Group plc (EVM) is building a global battery chemicals and technology business based on the development of the Battery Chemicals Complex in the Kingdom of Saudi Arabia.

EVM is focused on the development of the Battery Chemicals Complex to be become a global leader in the production high purity chemicals containing lithium, nickel, cobalt, manganese and other metals for high energy density cathode active materials required in rechargeable lithium-ion batteries for electric vehicles and renewable energy storage.

EVM will complete front end engineering and design (FEED) in Q4 2022 and start construction of the first two processing trains for production of lithium hydroxide monohydrate for the Lithium Chemical Plant in 12 months; that is, in Q1 2023. 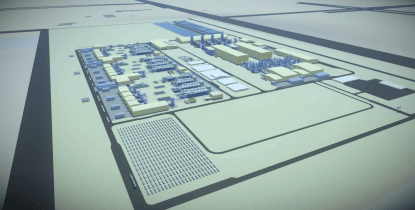 In addition to its lithium assets at Split Rocks and Waratah Well, Zenith Minerals Limited has a portfolio of gold and base metal assets in Western Australia and Queensland.

At Red Mountain in Queensland, drilling programs are planned to follow-up the high-grade near surface gold and silver intersected in Zenith’s maiden & subsequent drill programs (ASX Releases 3-Aug-20 & 13-Oct-20, 9-Nov-20, 21-Jan-21 and 19-May-21).

The Royal Commission for Jubail and Yanbu was established in 1975 to plan, promote and manage petrochemical and energy intensive industrial cities in the Kingdom of Saudi Arabia.

Yanbu Industrial City has become the third largest refinery centre in the world. It has also established the largest petroleum transportation port near the Red Sea.

On 22 December 2020 the National Industrial Development Centre (NIDC) and EV Metals Group plc (EVM) signed a non-binding Memorandum of Understanding (MoU) for the development of a Battery Chemicals Complex and a Saudi supply chain in the Kingdom of Saudi Arabia.

The MOU provides for up-stream integration through the development of a Saudi supply chain by exploration for and mining and processing of economic deposits of mineral resources containing critical raw materials including lithium, nickel, cobalt, copper, platinum group metals and rare earth elements for downstream processing at the Battery Chemicals Complex in KSA.

The mission of NIDC is to facilitate the growth and diversification of the Kingdom’s manufacturing and industrial base by, among other activities, fostering partnerships between local Kingdom entities and international manufacturers to grow and diversify the Saudi Arabian economy.